Alphonse and the Stonehenge Mystery

The famous stones of Stonehenge are being stolen to order, pulled from the ground like giant teeth; but who is behind the thefts? And why do they want the stones?
Alphonse le Flic, eminent detective, is called in to investigate. With the help of ace reporter Mole McGrath, Alphonse pursues the notorious sausage dog, Wolfgang the Pink Baron, and the ne’er-do-well badger, Nick Gristle, along country lanes and through the skies above.

The Frog Band stories follow the adventures of a joyously eccentric cast of animal characters. The inventiveness of the storytelling is surpassed only by the richness of the illustrations: highly distinctive watercolours bursting with humour and nostalgic detail, painted by the self-taught and hugely gifted Jim Smith. The stories are made more memorable still for their loving depiction of recognisable places and landmarks, most notably Jim’s home town, Salisbury, and nearby Stonehenge, recalled from Jim’s childhood in the 1920s and 1930s.

Jim Smith was born in 1920. He left school at the age of 14, worked as a delivery boy and cinema projectionist, before joining the RAF as a radar-technician. He survived three years as a Japanese POW (partly through his skills as an artist, by doing pictures for his guards); returned home and married Mary (who he’d known for just three days prior to the war, and with whom he was later to have three children); opened ‘The Little Junk Shop’ in Salisbury with Mary, and wrote and illustrated a series of children’s books. Jim died in 1990. The Frog Band Books arose from Jim’s love of, and talent for, storytelling and illustration; from his sparkling and mischievous imagination, and from his love of children.

Alphonse and the Stonehenge Mystery

One of the best children’s picture books of 2011.
Toby Clements,The Telegraph

‘I’m so happy to have found these books. They are among my son’s happiest childhood memories. … now we can share them with my 3 grandsons. We can’t wait.’
J.Martori, Phoenix, USA

‘I love these books … they are brilliant works that deserve recognition.’

‘The Frog Band Stories were tales [Jim] used to tell to his children as they were growing up and he wrote and illustrated all the books beautifully himself. … They are a real treasure!’

There are no reviews yet. 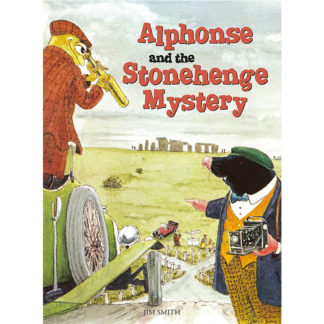 You're viewing: Alphonse and the Stonehenge Mystery £6.99
Add to basket